“Every person who believes in the unity of God and the mission of Muhammad as a Prophet is a Mussulman to whatever sect he may belong.” Well, this is just an overview , further in this Article we will discuss the in-depth concept of being a muslim in order to understand Who is a Muslim Under Muslim Law.

This simple definition of a Muslim has been propounded by Justice Ameer Ali in his book on Muslims Law first and since then it has been invariably followed by different High Courts.

According to Shariah a child born of parents, either of whom is or both of whom are Muslims, is presumed to be a Muslim. Shariat Act says, even if one of the parent is Muslim , the child will be Muslim. It has been seen under Hindu Law if one of the parents is Hindu and the other one is Muslim and if the child is brought up as Hindu, the child will be Hindu. The rule of Muslim Law , It is submitted will be subject to this rule of Hindu law.

In India, however, a child born of a Muslim father is presumed to be a Muslim but not a child of a Muslim mother and non-Muslim father, as was held by the Privy Council in Skinner v. Orde, (1871) and by the Oudh High Court in Mohd. Azim Khan v. Saadat Ali, (1931).

A Muslim remains a Muslim unless he renounces Islam.

A non-Muslim may embrace Islam and become a Muslim by conversion ( i.e. Person who professes Islam or persons who undergo the formal ceremony of conversion). It is not necessary to go into the motives of the convert, because there is no test or gauge to determine the sincerity of religious belief.

Majority of Muslims in India are Hanafis. The courts presume every Muslim to be a Hanafi unless otherwise contended. 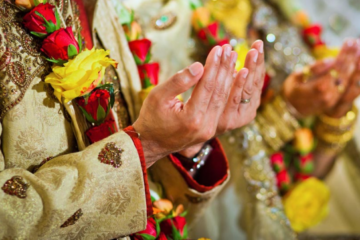